(CNN) — Whether they’re cutting their fingernails mid-flight or aggressively establishing armrest hegemony, we’ve already addressed the most irritating things travelers do on airplanes.

But what about the airport itself?

Shouldn’t it be easy to escape your fellow fliers’ antisocial behavior in a space as large as an arrival hall or a departure terminal?

As this list of annoying airport behaviors supplied by CNN Travel staff, writers and readers shows, courtesy and sense (neither are as common as they ought to be) are often the first two things to fly out of the gates.

Got an irksome airport behavior to vent about? Share it in the comments below.

Moving walkways — “travelators,” if you want to get fancy — are delightful.

Seriously, who does this on a flight?!

This device caused an in-flight fight

They make us feel like super people (If only we could always walk this fast!) and help us get to our gates without feeling like we just ran the New York City Marathon.

Some travelers, however, apparently feel they were designed like a theme park ride, meant to be enjoyed arm-in-arm with their amour and shopping bags as they gawk at the exotic sights passing by at 1 mph.

Standing to the side to make room for travelers with a plane to catch remains an unattainable skill to an aggravating number of passengers.

Most veteran travelers glide through security checkpoints with little drama.

Even travel newbies can read directions posted at said checkpoints and readily adapt.

So what’s with the people who always look like they’ve been told the existence of alien life has just been confirmed when their liter-bottle of water is confiscated and they’re asked to take their laptop out of the bag before it goes through the scanner?

More than a decade into the era of airport hyper-vigilance, the “security stumble” remains a perplexing airport behavior 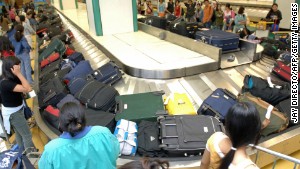 Would it hurt everyone to stand back a few feet?

A baggage carousel is an easy concept to grasp.

You stand back a few feet, watch a conveyer belt inch along, then slip in and grab your suitcase before swiftly retreating to make room for other travelers.

Alas, retrieving luggage is rarely so hassle-free, thanks to an impatient few who press their shins against the carousel, guarding the belt like power forwards protecting the rim in the closing seconds of the NBA Finals.

Some even push aside the elderly and children with their carts to secure a space directly in front of the little door flaps the bags slide through, forcing the rest of us to shove through the scrum when our suitcases appear.

Ever show up at the airport late and have the check-in staff kindly allow you to jump to the front of the line so you don’t miss your flight?

Ever do this multiple times, on purpose, knowing full well you’ll be allowed to skip the queue?

5. Re-packing overweight baggage at the counter

The line at the check-in counter is so long it’s starting to merge with the Sbarro line in the next concourse.

Finally you make it to the front, only to be held up by the guy who’s shocked to find his 200-pound suitcase is over the weight limit and going to cost him a week’s salary to check.

Frantically shuffling a few pairs of socks and a tube of toothpaste into another bag to get the weight down — “197 pounds is cool, right?” — before breaking into a loud soliloquy lamenting the injustices faced by travelers on this airline that he’ll never fly with again. 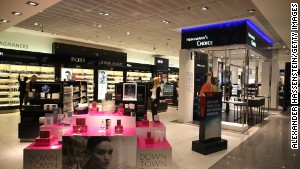 That cologne smells great. We don’t want it.

Sometimes it’s the airport staff that does annoying things.

All we wandered in here for was a bottle of cheap vodka.

We don’t need to be followed around and spritzed with perfume as a lady with immaculately applied makeup (in fairness, she does spend her days surrounded by expensive cosmetics) tries to upsell us on the smooth taste of a $2,000 bottle of whisky.

Nothing beats the sweet bliss of not sitting next to someone when you’re waiting for a flight.

We don’t want to bump elbows with others any more than others want to trade breathing particulates with us.

But in a civilized society, seats are meant to have one thing and one thing only placed on them.

Here’s a hint: that something isn’t suitcases, food trays or computers.

There’s a name for that one thing meant to be put in a chair — ironically, it doubles as a description for the kind of people who take up three seats in a crowded departure lounge with their jacket, shopping bags and assorted carrion. 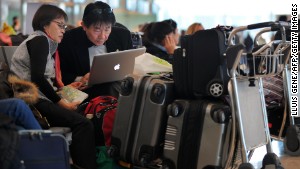 This is why they invented headphones.

Nobody cares if someone wants to pass the time waiting for a plane by zoning out with the mind-numbing pleasure of Candy Crush or “Hot Tub Time Machine.”

Just not on the iPad. At full volume.

There’s a reason they sell ear buds and headphones at every third shop in the concourse on the walk to the gate.

Granted, nobody knows how to parent other peoples’ kids better than we do.

And even childless travelers need to chill out and stop griping while little ones burn off some energy before a four-hour flight.

But shouldn’t “not allowing children to climb over seats, maul strangers with wet paws and screech at nine-second intervals” be a requisite skill for parents who travel with tot terrors?

10. Getting hammered in the airport bar

Getting a head start on a vacation is a time-honored tradition, but so is waiting until after the rest of humanity has finished breakfast before starting in with the beer-scented belching and pontificating on the referees who completely blew last night’s game.

It’s an airport, not a frat house.

You know the guy.

He’s got a Kindle, laptop, iPhone and iPad in his backpack.

And he needs to charge them all before the flight.

At the same time.

Using the only two outlets within a 100-meter radius.

12. Bringing your last puff onto the plane

Some travelers need a nic fix before a flight. Fine.

But for those who don’t smoke, that last ciggie huffed down 90 seconds before boarding makes a lasting impression.

A breath mint should be mandatory after a hurried puff puff session.

Even smokers shouldn’t get on a plane smelling so bad the Marlboro Man would ask to change seats if he had to sit next to them.

“Oh sorry, that’s a not a quarter. Just wait, I think I have a couple dimes kicking around in here.”

There’s a right way and a wrong way to get rid of foreign coins before you leave a country.

The first is donating them.

The second is trying to identify each one then matching the total with the cost of three bags of candy (nice try at a souvenir, by the way) at the gift shop while six other customers stand around waiting for “The Price is Right” game at the counter to end.

If there’s any need to elaborate on this one, you’re too far gone to be helped, anyway.

It’s no picnic being in boarding group Z.

But fliers who lurk around the boarding gate like they’re casing a mark for a robbery — waiting for ground crew staff to announce it’s time to roll so they can be the first on the plane to hog the overhead bins — sort of force the rest of us to do the same thing.

Occasionally, there is justice.

The truly bold of this bratty bunch can sometimes be spotted feigning innocence when a gate agent calls them out for trying to board before their row is called or slipping in with the business-class passengers. 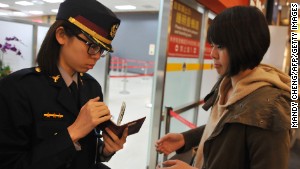 Follow the rules and we’ll all get along just fine.

16. Holding up the immigration line

People who hold things up by not filling in the details on their paperwork only make the experience more miserable for the rest of us.

It’s gratifying when airport staff bust travelers guilty of the above behaviors.

But when they’re just being plain miserable to everybody?

It sets the tone for a bad trip.

We know airport jobs are serious, important and, at times, incredibly stressful.

But (true story) is it really necessary to make an eight-year-old cry because she forgot to throw away her juice box before her backpack went through the X-ray scanner?

When you’ve just gotten off a 12-hour flight in a country you’ve never been to, even the simplest acts can be a challenge.

Everyone needs to make a living, but we shouldn’t have to negotiate a phalanx of unscrupulous touts who skulk around arrival halls preying on the weary and confused, insisting on providing rides into town for quadruple the price of a regular taxi.

This site uses Akismet to reduce spam. Learn how your comment data is processed.